We have updated our 2019 report on the problem of plastic pollution generated by buying new plastic as costumes or clothing for Halloween. Read the new report here. 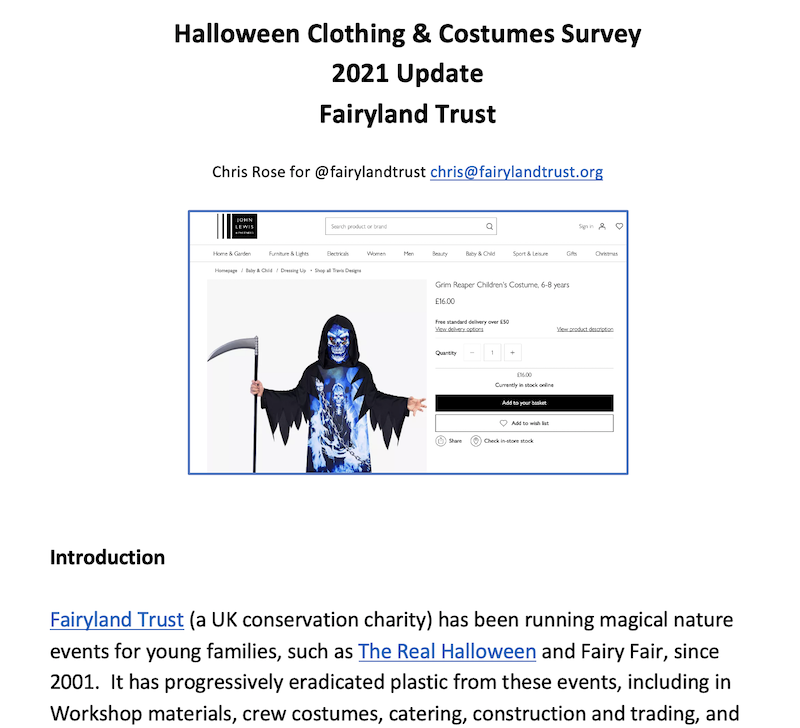 A small snapshot survey was conducted to check if much had changed since the 2019 survey of 19 major retailers.  That survey found 83% of Halloween Costumes and clothing presented as for dressing up at Halloween was made from plastic (69% of which was polyester). Based on studies of the waste stream and consumer behaviour it was estimated that this generates 2,000 tonnes of plastic waste a year, most of which ends up as plastic pollution through dumping, littering, micro-plastic generation (including through ‘recycling’), or incineration.

The 2021 snapshot found three quarters of costumes/clothing presented was still made from polyester, with cotton the next largest part at about 22%.  It looked at M&S, Next, ASOS,  H&M and John Lewis. The report notes that there is some suggestion that manufacturers and retailers are taking some steps to substitute materials such as cotton and (for accessories) metal and glass in place of various plastics, and that others may be increasing use of recycled polyester.  Of these two approaches the Fairyland Trust favours substitution.  Overall the actual generation off plastic waste is likely to remain about the same as in recent years.

“The best way to dress up but avoid adding to the Halloween plastic environmental disaster is to put together a look or costume by re-using existing clothing. A visit to a charity shop is a simple affordable way to do this”.  [New Fairyland Trust charity shopping Halloween video here].

“We welcome the fact that some retailers seem to be making efforts to substitute for plastic in costumes and clothing but there is a long way to go.  All retailers, including Amazon, should be transparent about what costumes are made of” [Many Amazon costumes no longer state the materials they are made of but appear to be polyester. Possibly because consumers are avoiding plastic].

“All retailers should also offer consumers a ‘chose plastic-free’ search option as at present you usually have to drill down one or more levels to search for the right information.  This would help build the market for alternative materials (eg tencel, lyocell, made from wood) which are now on the market but little known to consumers”.

“As many scientists have pointed out, plastic is an accumulative, toxic, persistent pollutant and should be seen as (and labelled as) such. For this reason it is also a dead-end to try and recycle plastic, which only delays the process of it becoming non-recoverable pollution, while continuing the market for new plastic, including in textiles.  Also for this reason, plastic needs to be phased out in non-essential uses (costumes being one example) and pro-plastic ‘counter arguments’ such as comparing land or water requirements of alternatives are essentially greenwashing efforts”.

It adds that signs of change among retailers are welcome, a more exhaustive survey is needed and that although there has been little overall change so far, there is at least greater public awareness. Plastic pollution from Halloween remains an environmental disaster.

Note: the Fairyland Trust 2018/9 infographic ‘The Scariest Thing About Halloween Is The Plastic’ has received over one million views online. 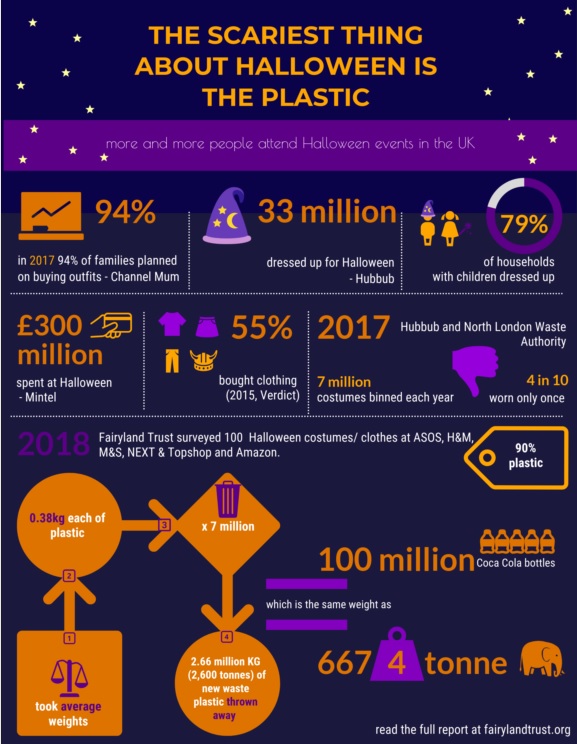