The Crown Makers invited families into their workshop decorated with autumn leaves and berries and, making sure they were comfy, told the story of two children, Tarran and Willow, who were the first ever human Fairy Crown Makers.

The visiting trainee Crown Makers were soon creating their own beautiful crowns, just like the fairies had done. Using a woven willow base, seasonal decorations were added ready for the next fairy party. The trainee Crown Makers learned about the eight fairy parties, each celebrating the changes of the seasons and the changes in the forests around them. With Halloween, or Samhain, being the next fairy celebration we used treasures from nature associated with this time.

Using leaves from native trees and creating our Sloe Berries and Crab Apples with tissue paper and Old Man’s Beard from sheep’s wool (we didn’t want to steal the birds and other creatures’ food!), the trainee Crown Makers wove some stunning crowns to wear with pride. As they finished the workshop, they were all given a fairy calendar to remind them of the eight fairy celebrations and the plants associated with them. Everyone decided they would make a crown for each of the fairy parties with different leaves and tissue flowers of berries, just like the fairies and children in the story had done, so these calendars were perfect! They also each received some special wildflower seeds to be planted at home – autumn is the perfect time of year to plant wildflower seeds ready for fairy spring and summer parties.

The trainee Crown Makers were delighted when they saw themselves in our mirror, and even more delighted when they were shown some of the real trees from their crown making growing just outside the Arts Centre.  We found a beech tree, looking like a grey elephant’s leg, that had dropped lots of ‘fairy hats’, or beech mast. We found a beautiful old yew tree covered in bright red berries, and we even saw some ivy in flower, which many of the children remembered was great food for bees in the autumn when there’s not many other flowers around.

It was agreed that each of the trainees could call themselves Fairy Crown Makers and share the secrets of the fairies and their parties with friends and family. A fantastic day enjoyed by all! 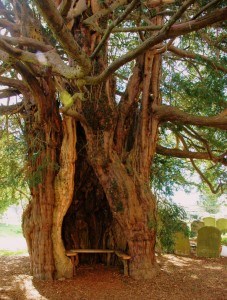 Above: an ancient Yew tree.  Some of our living Yews are so old, that they were around before the Romans came to Colchester.