Home Uncategorized We Think There Might Be Fairies Here … 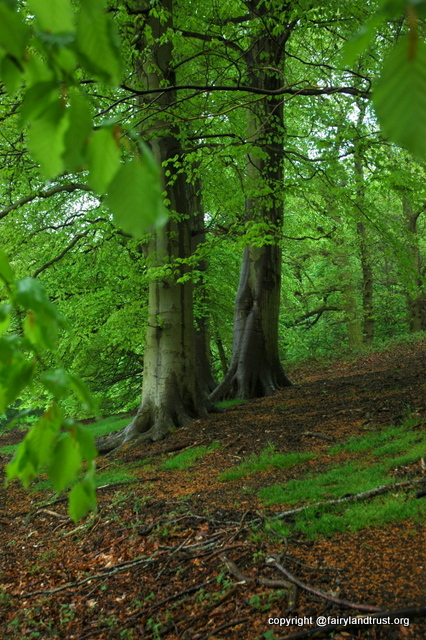 Have you been to Sennowe Park ?  Sarah Wise and Abbie Panks have been for a stomp about.  The sheep have gone off for a rest now after nibbling all that grass down but you know what ?  This place has a very magical feel to it.

We’ve had a good look round. 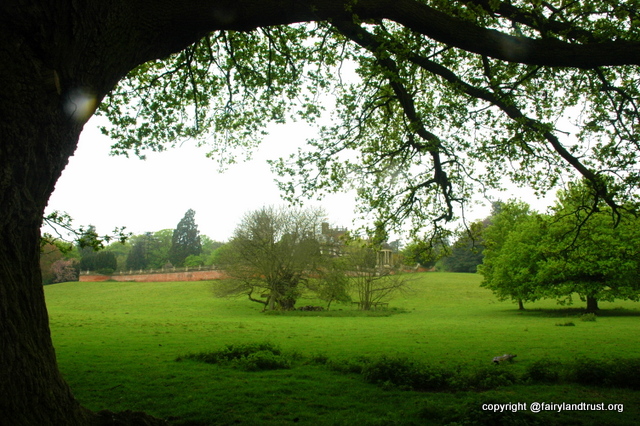 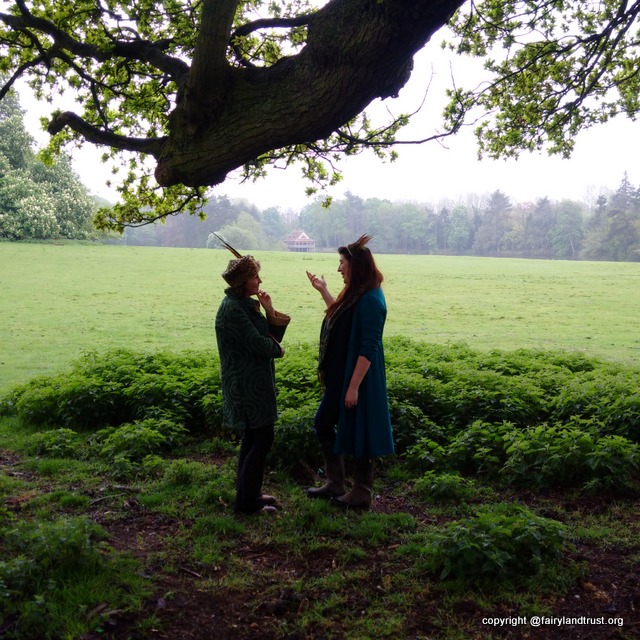 And after careful consideration 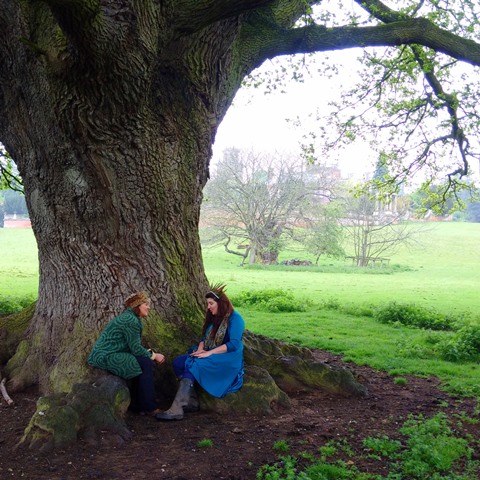 And a long chat, we think this tree would be just great for telling stories under. 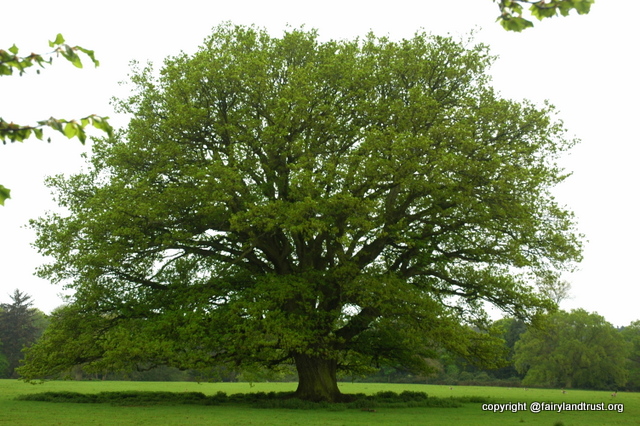 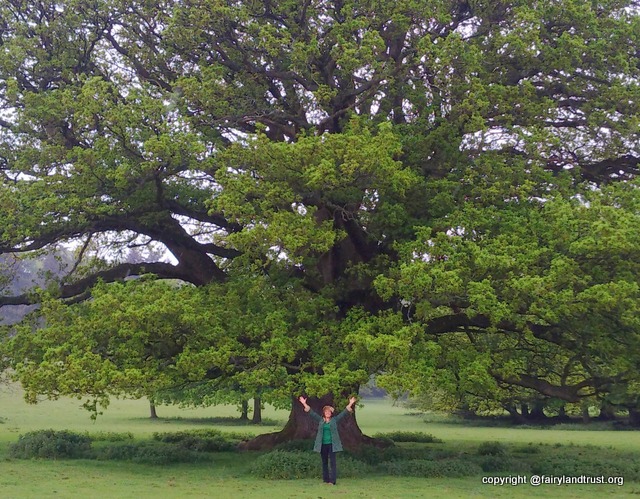 Here’s Sarah Wise demonstrating the scale of it.  Experts say it’s maybe 350 years old.  But you know what ?  There’s another even more amazing tree just nearby. 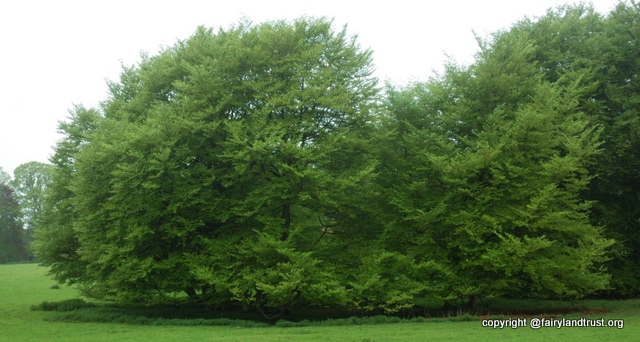 We call this the ‘Fairy Beech Tree’.  And the unusual thing about it is that it looks like a group of trees, or a ‘grove’, which was often just the sort of place associated with fairies and magical happenings in ancient days.  But if you have a closer look, you will find … 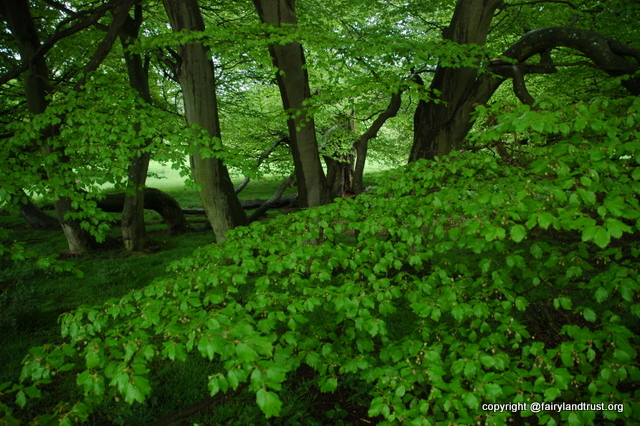 That behind the veil of beautiful shiny new green leaves, there are a circle of ‘trunks’. 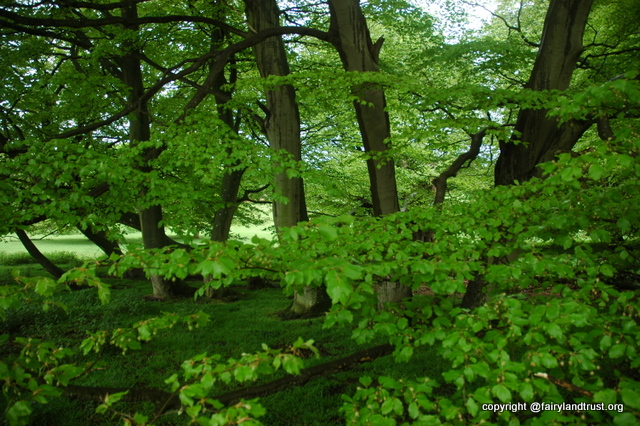 Look a bit closer and you can see that these are all slightly growing outwards. 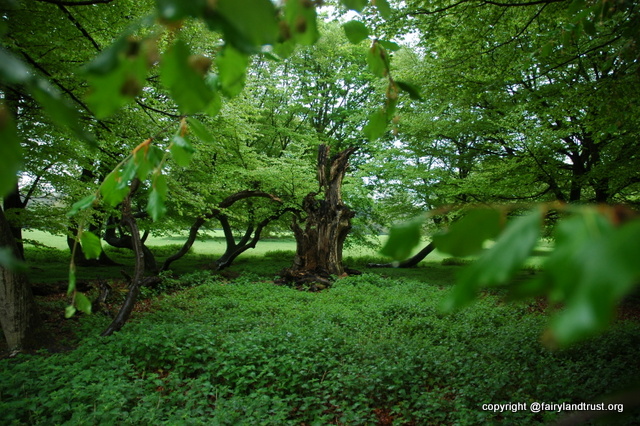 And in fact are all the ‘daughters’ of one very ancient old beech, now mainly rotten but still alive, growing right in the middle.  The atmosphere is very mysterious and peaceful.  This tree is very old indeed for a beech trees but it’s not going to die, it’s just moving outwards.  Some call these ‘phoenix’ trees. 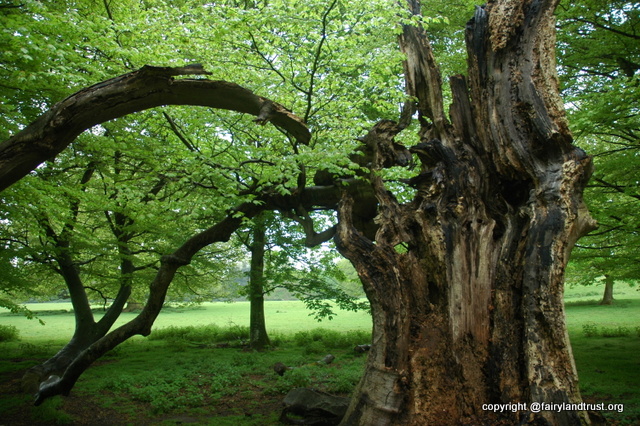 Branches from the old trunk have bowed down and touched the ground, and where they do that they have taken root, to produce what look like ‘new trees’.  Lots of beetles that can only eat decaying old wood need these sorts of trees to survive.  But we think this is probably the sort of tree elves and fairies like too.  What do you think ?  It seems to us a good place for something like Fairy Training. 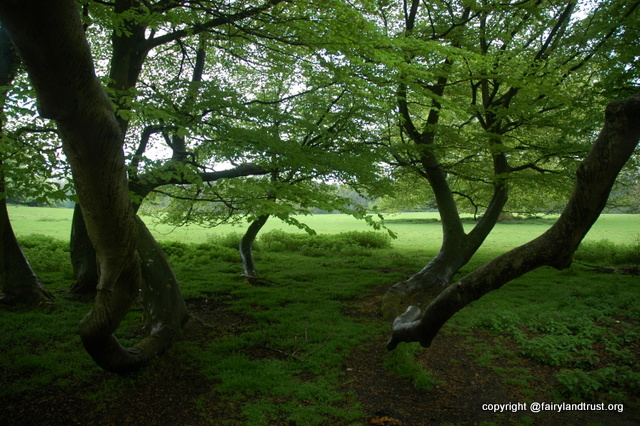 Have you ever seen branches becoming trees like this before ? It’s called ‘layering’ by people who study trees but we call it magical.  Very Lords-of-the-Rings-ish. 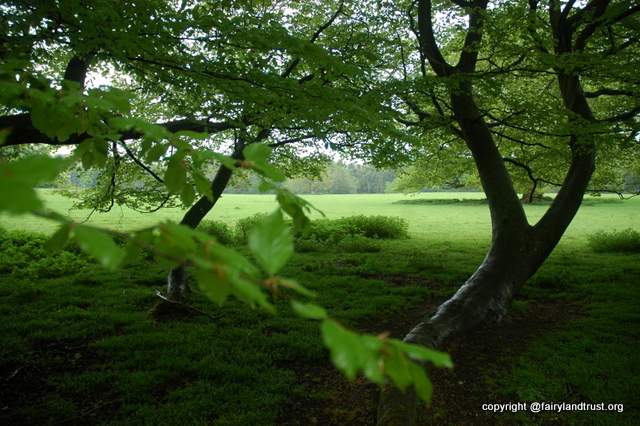 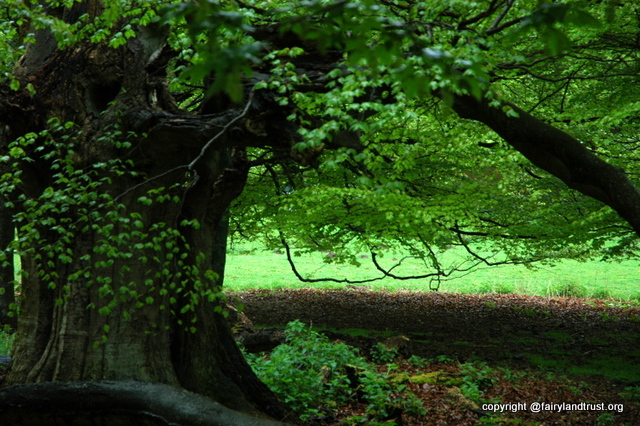 One day the old trunk in the middle will rot away but not yet, and we must take good care not to damage it.  All sorts of things could be living in here.

We also found a lot of other stuff at Sennowe Park that we think mean it would be a  great place for the Fairy Fair.  It’s got some really nice woods up on the slopes. 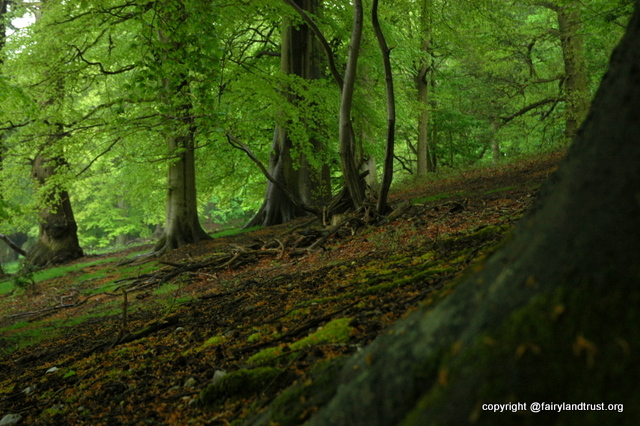 And lots of room for tents and Workshops, Craft Stalls, Maypole Dancing, Cafes and all that other good Fair stuff.

In fact most of the Fair like the Stage and Face Painting and Animal Hospital and Fairy Flower Making,  the Performance Tent (and the Good Elf Pub) will fit in right here ! 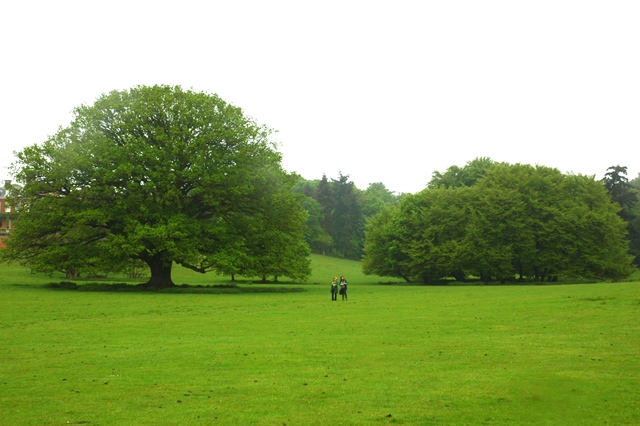 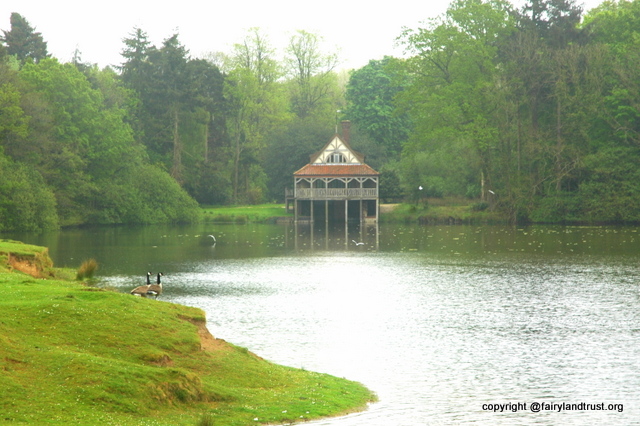 Plus there’s a Lake.  And we think these woody bits would be a good area for making Secret Dens 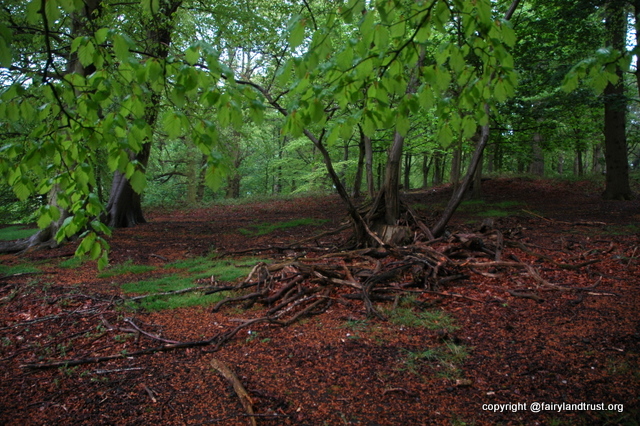 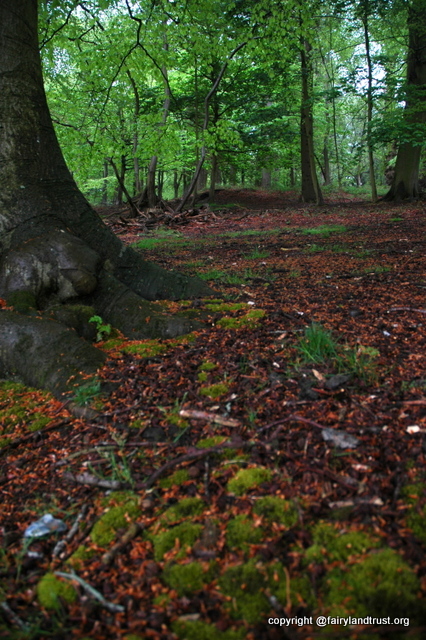 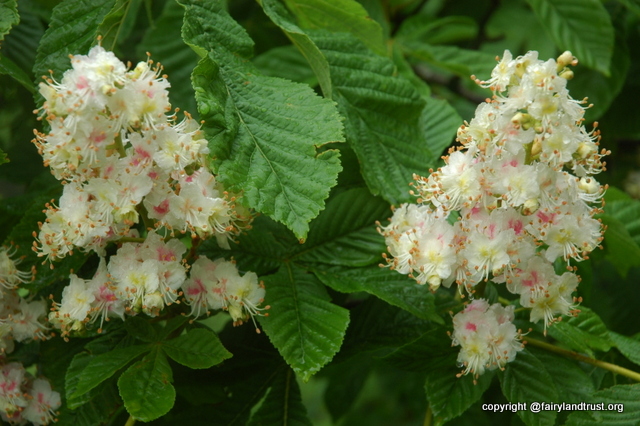 There are also lots of other lovely trees like this blossoming Horse Chestnut which later in the summer will make conkers.  So we look forward to seeing you there, at the Fairy Fair !

(It you’re not sure how to get there, have a look at Getting to Sennowe Park)