We’ve all heard about how bees and other insects are vanishing, which is mainly down to chemicals and industrial farming but there is something we can all do about it by providing a home for them in our gardens.  At this time of year Queen Bumble bees are venturing out of their underground hibernation nests and need to find nectar quickly to survive!  So a great way to mark St Valentines Day is to provide bees with Primroses.

Have you seen this YouTube video ‘Fairy Gardening Part 1’ made by Trust volunteers?  It shows a love story of two bumble bees who meet while searching out primroses.  To help bees, we suggest buying primrose ‘plug plants’ from a supplier like British Wild Flowers and Plants – through the post.  Of course you can also sow them from seed but that is a slower if rewarding business.

So we’re asking everyone to ‘Make The Primrose Promise’ and show nature some love this St Valentines Day (Thursday 14th February) by buying and planting native primroses at home.  ‘Could be a great present of course.  Don’t worry if you can’t get the trowel out immediately – you can place an order and dig them in anytime in the next week or so and once they take, they’ll last and be a boon for bumblebees for many years.

Why We Recommend BWFP Plug Plants

‘Plug plants’ are robust baby plants with a developed root and stem/leaves so they can take easily. They are a much quicker and more reliable way of establishing most wildflowers in gardens than using seed.   The Trust recommends British Wild Flowers and Plants (BWFP) as expert growers of true native wildflowers and uses them in its Fairy Gardens Workshop which will be run at the Fairy Fair on May 26th and 27th in Bradmoor Woods, Norfolk.  (The Trust has no other commercial relationship with BWFP).

Primroses are available by mail order from BWFP at https://www.wildflowers.uk  (primrose page here).

Importantly BWFP does not use pesticides on its plants.  David Goulson at Sussex University found in June 2017 that 27 of 29 plants bought with “perfect for pollinators” and similar labels actually contained bee-killing pesticides!  (The main suppliers then pledged to remove neonicotinoid pesticides but nobody has checked this and they may be using alternatives which can also kill bees.) 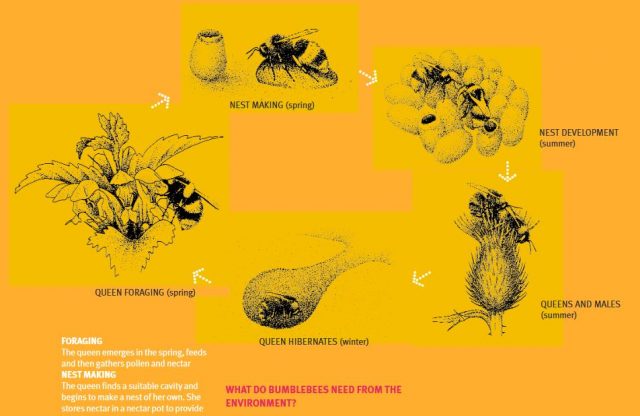 Diagram from the Wildlife Gardening Forum

Chris Rose of the Fairyland Trust says:  “Primroses supply vital survival nectar for Queen Bumblebees  in February – and we can all grow them in our gardens, or even in a flowerpot.  It’s important to plant the native kind with the delicate yellow flowers as multi-coloured ‘primulas’ may have little or no accessible nectar.   If you do buy a ‘primrose’ from a garden centre or shop,  make sure your primrose is Primula vulgaris – anything with a ‘brand name’ is not a true native primrose but a cultivated variety, even if it’s the right colour”. 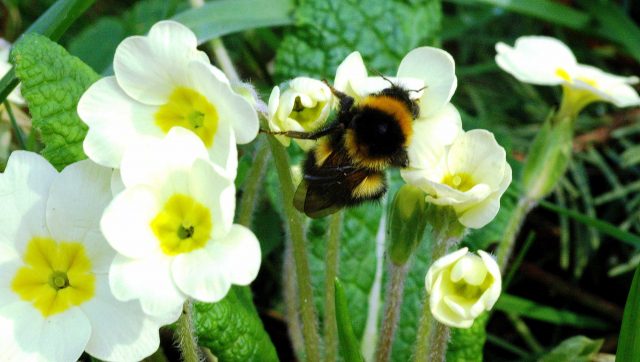 A Queen Bumblebee enjoying a snack from a Primrose 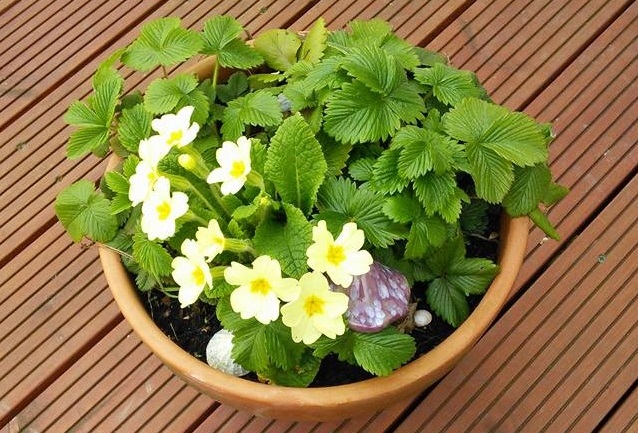 These Primroses and Wild Strawberries grew from plug plants in a Fairy Garden Workshop – you don’t even need a garden to help (Photo: Janet Shaw) 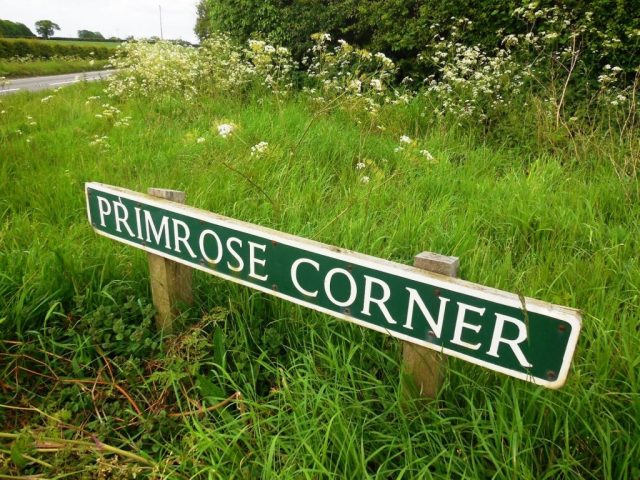 In Norfolk – but no longer any Primroses visible at Primrose Corner

Pollution, pesticides and grubbing up of hedgerows have destroyed many rural haunts of primroses, often leaving places with names like “Primrose Corner” in Norfolk without Primroses.  This loss of wildflower diversity has many knock-on effects, particularly on insects.  Primroses for example, are also the food-plant for the caterpillars of the rare Duke of Burgundy Fritillary butterfly and several moths including the Large Yellow-Underwing. Primroses are pollinated by moths, and are also used by the early-emerging yellow Brimstone butterfly for nectar (see below). 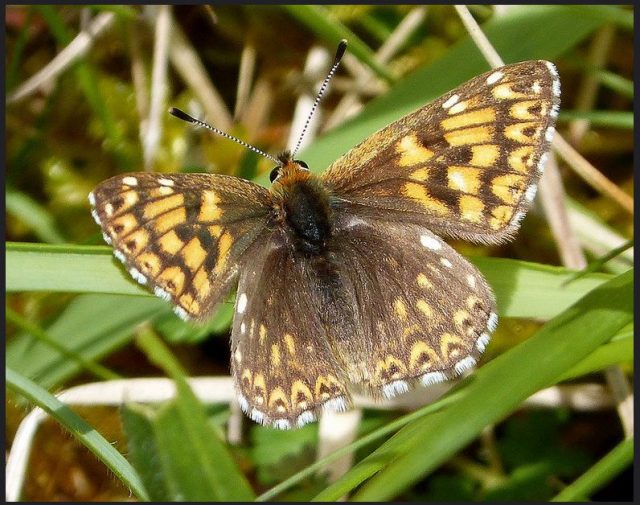 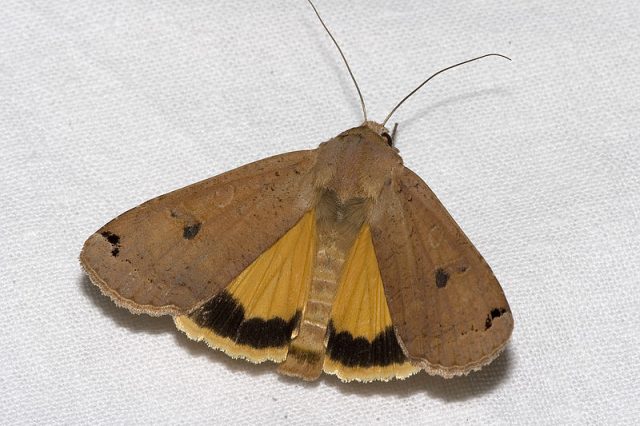 The Large Yellow-Underwing moth. Another nibbler on Primrose when a caterpillar. (Photo: https://en.wikipedia.org/wiki/File:Noctua.pronuba.7591.jpg) 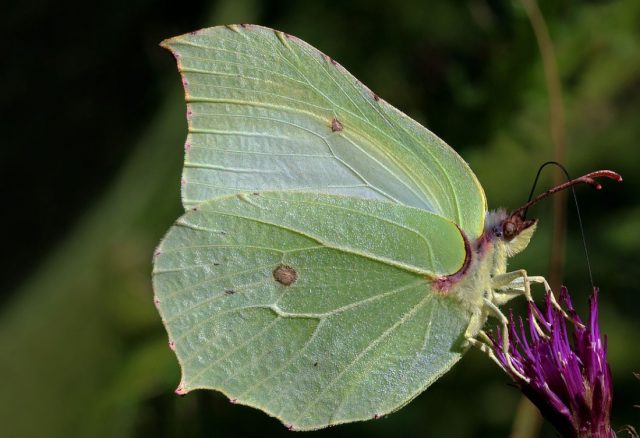 The Brimstone butterfly has declined by over 40% since the 1970s.  The Duke of Burgundy has declined by over 50% and is now only found at 20 sites in the UK. [Butterfly Conservation]. Indeed almost any insect visiting your Primroses is in need of your help.  Several of Britain’s bumble bees have already become extinct and most seem to be in decline in most places.

One reason is that bumble bees need a dense network of nectar-rich flowers to survive.  Juliet Osborne at University of Exeter fitted bumblebees with transmitters to study their foraging, and found most stayed within a few hundred metres of their nest, making them dependent on very local flowers.

The Wildlife Gardening Forum points out that bumblebees ‘store only a few days’ worth of ‘backup honey’, in small wax pots. That puts them at a disadvantage compared with honeybees, which keep much larger food stores in their hives and get syrup from their keepers when stocks run low’.  But research also shows that honeybees only pollinate about a third of crops, leaving them mostly reliant on survival of bumble bees and other wild insects.

Pesticides are also killing off bumble bees, especially in agricultural areas.  Fungicides as well as official ’insecticides’ are known to harm bees.   A 2018 study of buff-tailed bumble bees found they were more successful in urban and suburban areas than in farmland.  Gardens cover 433,000ha of the UK (4330km2), more than Surrey and Greater London combined, and are a huge potential reserve for bumble bees if they contain the right plants and undisturbed wild corners for them to make underground nests in. Between 1972 and 2001 Jennifer Own recorded 2673 species of wildlife in her garden in Leicester (9% of all those in the UK) including 59 types of bee (not all bumblebees).  Of course there is little point in encouraging ‘the right’ plants in gardens if you then use pesticides. 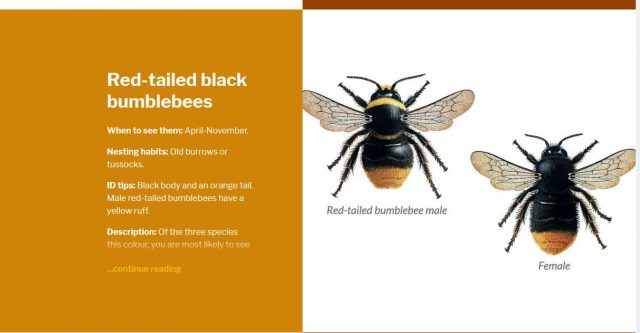 There are 24 species of bumblebee resident in Britain, three have become extinct and only seven species are widespread:

There are also many more solitary bees, and over half of them are in need of help as they are in decline. 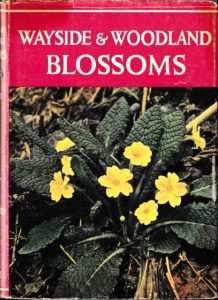 ‘Primrose’ means ‘first flower’ and is a sign of spring.  It is the County Flower of Devon and prefers clayey damp soils.  It needs a shady site but also some sunshine, and flourishes in woody hedgerows (including ‘ghost woods’ left over along a lane which has lost an adjacent woodland) and in woods that are coppiced in the traditional way which creates a cycle of years of light and then shade.

Primroses were once abundant but are an increasingly rare sight.  In Cambridgeshire they are scarce outside ancient woods and hedges and in Norfolk often restricted to similar places and churchyards.

Primroses can live 15-25 years or more and may not flower every year. Depending on conditions, Primroses flower most in March to June but can be found flowering earlier in mild areas.  The Primrose is spread by ants carrying the seeds.  Wild primroses have five petaled flowers varying from almost white to deep yellow and rarely, pink but are usually a delicate pale yellow.

‘How to plant and when: Plant bare rooted or potted Primrose plants in autumn or spring (immediately after flowering) into well-dug, moist but free-draining soil. It is essential to keep young plants watered during the hottest months.’

In folklore, five primroses growing together signified an entrance to fairyland, and a child who ate one (the petals and flowers are edible and have been used in medicine and to make tea) or looked over the top of a flower, might see a fairy.

Old names for Primroses include Butter Rose, Jack in Box, Jack-in-the-Green, King-Charles-in-the-Oak, Lady’s Frills, Milk Maid, May Spink, Summerlocks and, in Scotland, Simmerin, from the Norwegian for ‘cow anemone’.  Primroses are also said to bring luck in love, and have a sweet scent.

Since Victorian times, April 19th has been known as ‘Primrose Day’ in honour of the late Prime Minister Benjamin Disraeli; Primroses, his favourite flowers, are placed at his statue in Westminster Abbey and his grave at Hughenden in Buckinghamshire 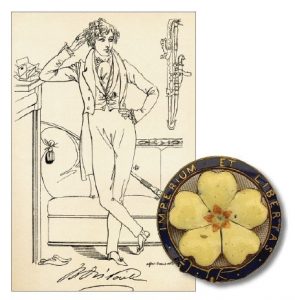 The young Disraeli was known as something of a ‘Dandy’ and was a favourite of Queen Victoria.  The Primrose League was set up in his memory.

Here are a few other good spring plants.

One of the most famous, much sought after by herbalists and perfume-makers, is the Sweet or Wood Violet.  Some say it’s the foodplant of the Dark Green Fritillary but we are not so sure how attractive it is to bees.  But as a complement to Primroses it would make a great present and is available as a plug plant. Like Primrose, it’s seed is spread by ants.

It is most famous for having a unique scent, which includes a quirky chemical called ionine, which acts as an anaesthetic on your nose so once you’ve sniffed it, you can’t detect the scent again for quite some time!  It has a long romantic heritage.  Sweet violet has always been associated with love – our friends at Plantife say: ‘The sweet violet has a long and rather romantic history in European and Asian folklore: the ancient Greeks first used it to make perfume and the Romans to make wine. Ancient Britons used it for cosmetics. Medieval French troubadours used it to represent constancy in their tales of chivalrous love’.

Anyway thanks to Zoe Watson who let us share this lovely picture posted on twitter a few days ago: 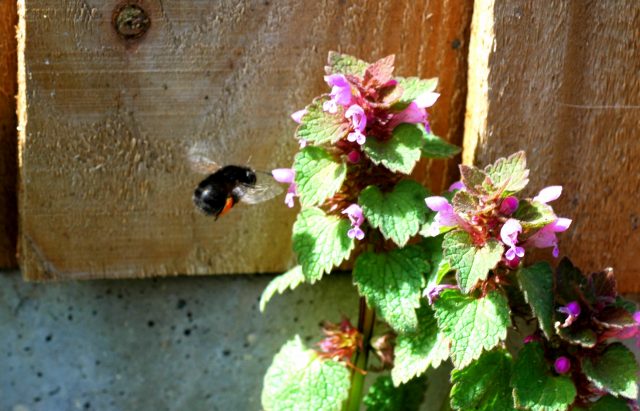 Hairy Footed Flower Bee alighting on Red Dead Nettle (not a ‘weed’ to a bee!) 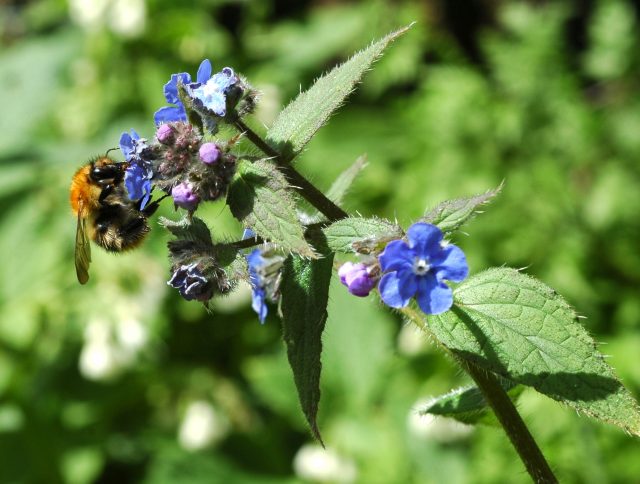 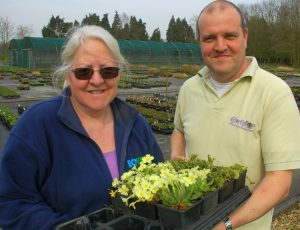