Home Uncategorized How to Raise a Giant Watering Can

How to Raise a Giant Watering Can

Are you getting ready for the Fairy Fair ?  We’re busy setting up at Sennowe Park.  Above are some of our Workshop tents being made ready for you. 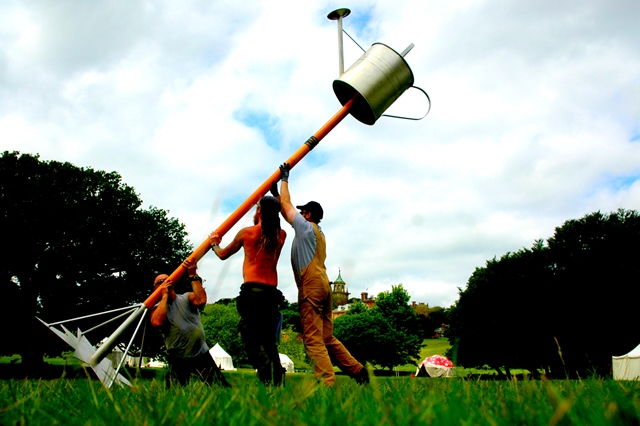 This morning we also raised the giant Fairy Watering Can.  Once complete with ribbons it will form the centre-piece of our Maypole.  The pole was once the bowsprit of the Norfolk sailing barge Juno before she got a bigger one for a new sail.  The can and the rest has been made for us by Designer and Maker Simon Carroll from Suffolk.

That’s the story of our Maypole which of course has a very big watering can on it because watering cans with the Sign of Fairy Gardeners will play a major part in this year’s Fairy Fair (see here and the Finale under ‘Line Up’).

But did you know that Maypoles have a very long history than and it’s all about the magic of trees and flowers ?

Traditionally Maypoles had a ‘Fairy Garland‘ of wildflowers around the top.  Each of these had magical associations and they could include Red Campion, Bluebell, Stitchwort, Dandelion, Blackthorn, Elder, Herb Robert, Hawthorn (the May Tree), Wood Sorrel and Rowan.

In Anglo Saxon times and before, people held many trees to have magical properties and it is thought that May celebrations would have taken place around specially sacred trees, in the woods.  Later people lived more in villages and for a while Puritans tried to ban May dancing because it was all associated with fertility and spring !  Various kings brought the traditions back, and over centuries people took to going into the woods and coming back with a small tree or pole, and setting up a Maypole to dance around on the village green.  Very similar traditions went on all over Europe and emigrants later spread them to North America as ‘May Day’.

The church of St Andrew Undershaft in the City of London is named after the maypole that was kept under its eaves and set up each spring until 1517 when student riots put an end to the custom. The maypole itself survived until 1547 when a Puritan mob seized and destroyed it as a “pagan idol”.

May Day celebrations, banned under the Commonwealth, were revived in 1660. The maypole at Castle Bytham, Lincolnshire, was inscribed to commemorate the date when it was later cut in half for use as a ladder

When the Restoration occurred in 1660, common people in London, in particular, put up maypoles “at every crossway,” according to Aubrey. The largest was in the Strand, near the current St Mary-le-Strand church. The maypole there was the tallest by far, reaching over a hundred and thirty feet, and it stood until being blown over by a high wind in 1672, when it was moved to Wansted in Essex and served as a mount for a telescope.

Read more about Maypole traditions at this school website.  Dance around ours at the Fairy Fair !